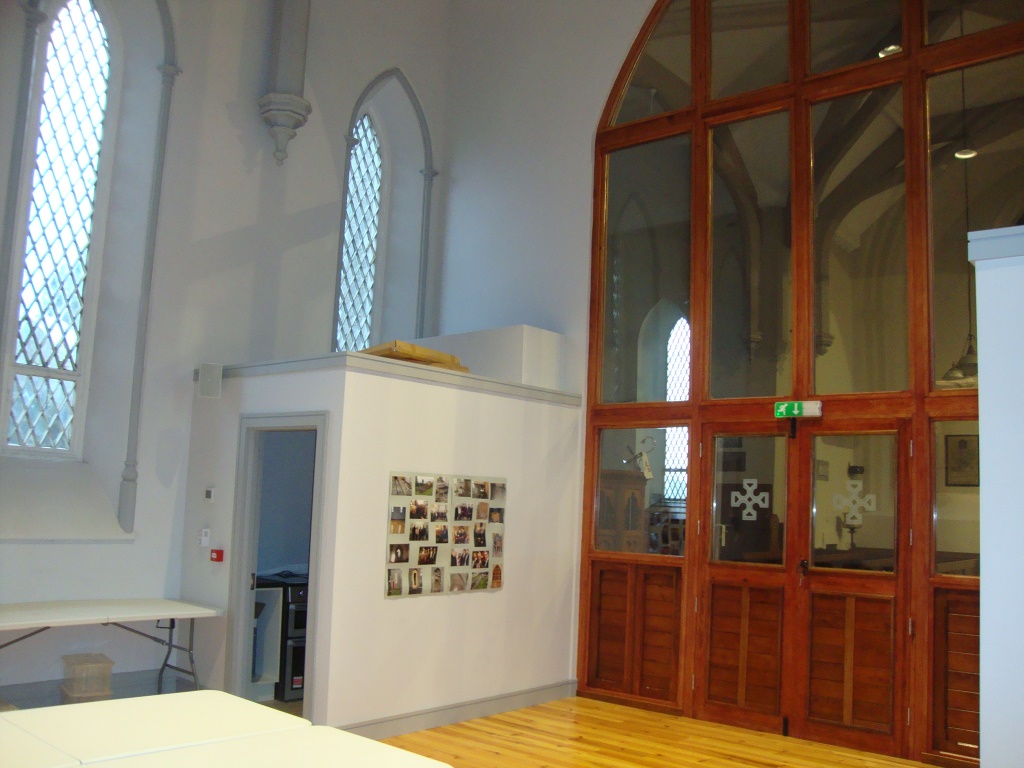 The North Transept has been at the “idea” stage in the minds of parishioners for probably forty years and the erection of a curtain was an out of sight out of mind fix.

2014 saw a new confidence and resolve to look for possibilities rather than hurdles. Peace 3 gave us a chance to learn that looking out to the wider community opened up an opportunity for the parish to see new potential in how a valuable asset could be used and funded. Good relationships were building and a part of a 30k grant helped put a new energy efficient heating system in St Pauls.

With this new momentum the decision was taken to engage with the planners and go for it only problem the bank account was empty and build estimations were in excess of 120k.

So the first port of call was The Church Priorities Fund. They indeed liked our vision and offered us the full 35k if we started before March 2018 .So by spring 2016 planning permission and a grant offer were in the bag. The staff at Priorities suggested we approach Leader to gain the additional funding to undertake the project.

Although the Leader grants were not open a delegation met with Leader to see could we meet their likely criteria. We came away realising that there was a massive job to be done to stand any chance of getting over the line.

Firstly as Leader cannot fund religious groups a Community group with its own constitution and bank account needed to be formed to make the application. St Paul’s select vestry decided to ask diocesan and RCB permission and to go the Leader route with all the legal requirements involved. In April 2016 “The Reading Wing Community Group Collooney” was launched at a public meeting in the Teeling Centre attended by Archdeacon Stephen McWhirter who gave a very passionate interpretation of The Sophie Cooper monument which is situated in the North transept of St Pauls. Subsequently a committee was formed of Lynda Devaney (secretary), Ian Craig (treasurer), Nigel Bourke (chair) and Robert Craig, Kathy Clarke and Cllr Sinead McGuire giving wider community representation. Ruth Nairn joined later. Wendy Lyons would act as advisor and project manager to the group.

A licence for the area from the RCB needed to be in place for five years after the drawdown of a grant. The task of gaining the formal support of all the local community groups was undertaken. Establishing the need for a new community room was vital. A list of all possible uses was drawn up with afterschool facilities at the top. Hence an outside amenity area was sought from the adjacent St Pauls School. This was kindly granted by the School and diocesan boards. The contractor would need to be chosen by e-tender and John Fahey handled this process. John would also be employed to gain a fire certificate and handle compliance and sign offs for the council and Leader.

The services of Michael Kirby of Meehan and Tully were engaged to process all this information into a business plan and application to Sligo leader in January 2018. A lengthy process followed to satisfying Leader regarding tax, vat, procurement, insurance, building compliance, fire and heritage and finance.

Martin Wilson and the O’Neill brothers deserve our highest praise in the way the job was delivered to the highest of standards with no quibbles on budget and on time.

On 23rd November we were thrilled to have An Taoiseach Dr Leo Varadkar come and cut a ribbon to officially open the building followed by a dedication by Bishop Rooke on Jan 27th.

Saturday 16th of February was another special day when the room was opened up to the whole community to view. Those who were instrumental in the course of the project were welcomed back, Rev. Adam Pullen showed up and Archdeacon Dadswell sent the rector a letter of regret with a generous gift. It was great to see local folk enjoying the room and newly decorated church. This work was funded by a Dream Auction held in the Sligo Park Hotel on the 30th October. Over 11k was raised and folk who supported the event were able to see how their money was put to use again our thanks to all who supported it Refreshments were kindly provided and all made for a most pleasant atmosphere.

The challenge now is to manage the activities in the room so that the best use is made of it and that everything is complimentary to the work of the church.