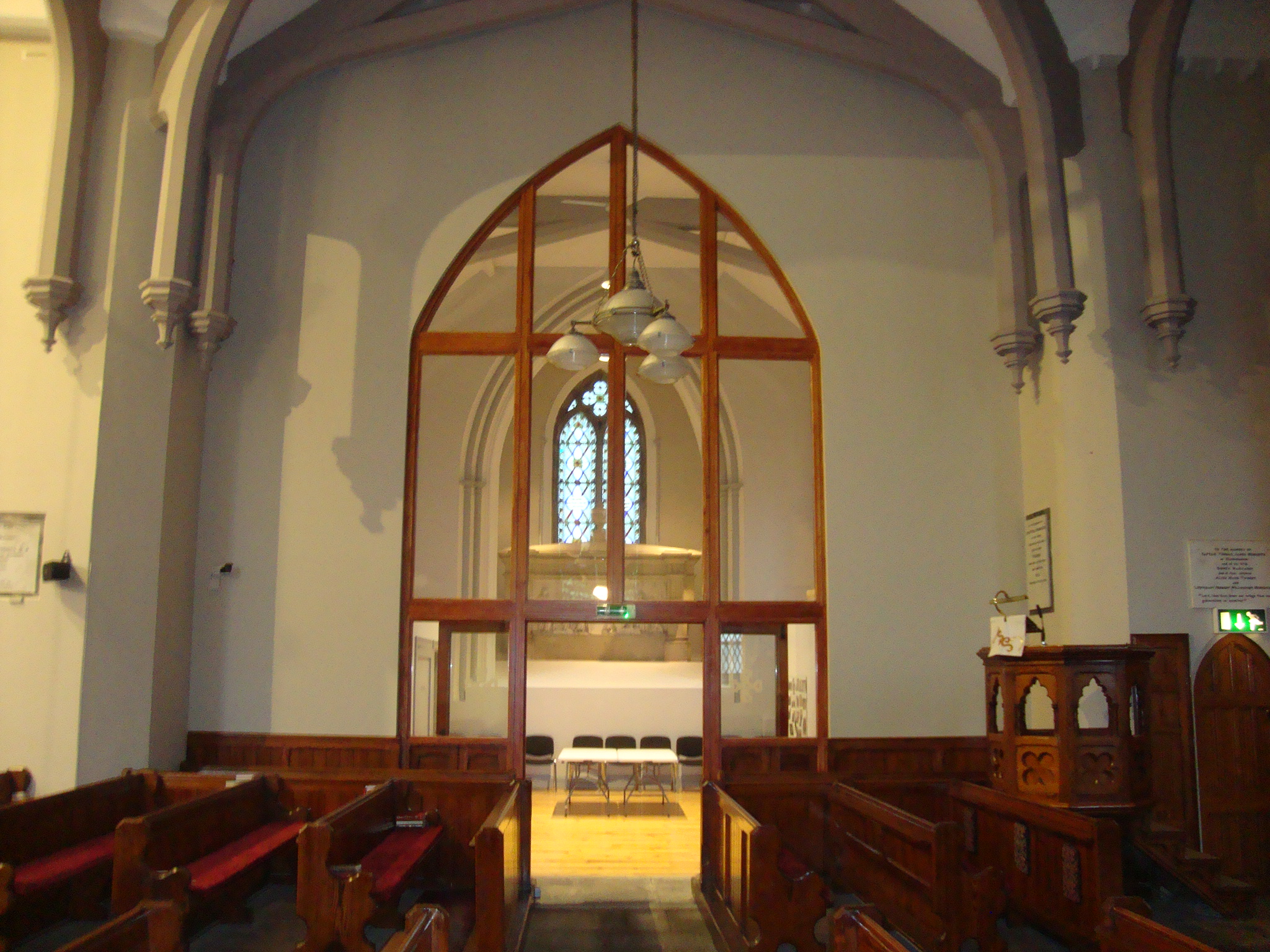 In November 2008 Rev Archdeacon Richard Dadswell approached me and asked how we should consider the North Transept and its future. Having considered that the position of the wing was liturgically in correct as there is no view of the communion table from this section of the church. The future of the wing then became an area which could be separated from the church and/or could hold alternative functions.

The north Transept was designed by Sir John Benson to hold the memorial of Mrs Sophie Cooper, who was Mr Edward Joshua Cooper’s M. P. first wife who had died in child birth. The memorial is a very fine example of the work of Gibson a well-known Welsh sculptor.

In January 2009 the Select Vestry gave permission to explore the options with the County Council. This was undertaken and the council were determined that any work to be done to the church would require a survey/impact statement which would cover the whole church and any repairs that might be required and how they were to be undertaken and what impact they would have.

In 2012 a building sub committee was formed and its’ first task was not the north transept but heating the church. Robert Craig researched this and we came up with the modern air to air system that is now installed in the church. It is the least invasive to the fabric and works well. This was grant aided by SAEI and Peace 3 (we organised the making of a short film between the 3 schools in the village and a scrap collection by the parishioners). This work was covered by a Section 5 Exempt works under the planning Acts. The attic of the church was insulated in 2015 supported by SAEI.

By December 2015 a conservation plan had been prepared along with proposed drawings showing a permanent division of the North Transept from the rest of the church with a full height glazed arch and wall, new toilet and kitchenette in the new space and a new entrance.

The design was to set the new partition back from the main wall of the church so it was not seen as an intrusion until one was half way up the church; the communion table and east window being the most important elements in the church. There is a pew now still in position with the new wall behind it.

This scheme was granted on the 11/2/2016. The project then was looking for funding. The alternative entrance meant that it was possible to open up use to the wider community, in so doing a wider field of grants was available to apply for.

The project then applied to Sligo Leader and as Leader has no designated heritage section it is part of community and social inclusion section.  This necessary permission from the Department of Culture, Heritage and the Gaeleacht, which delayed the project by some months. On August 1st 2018 a contract was signed with Moymart Ltd. to construct the project.

The building of the project:

This was straight forward in many ways but difficult in others. The works to the playground were completed first to avoid any work being carried on when the National School returned in September. A temporary screen/partition was erected to close off the building works and to keep the church dust free. This meant that services were not interrupted throughout the whole project.

Access was limited as the existing graveyard gateway was narrow a pedestrian access was the other only access. After the partition was completed the new door way was opened up and the contractor then used that as part of his site. The congested graveyard restricted storage on site.

The pews were removed off site and stored to be used to make the timber framing for the arch at a later date in the contract. The centre aisle was cut stone and this was removed and stored to be repositioned in the centre aisle of the main church which had two concrete sections where the floor grills were previously removed. The north transept floor was removed and a new insulated concrete sub floor was laid. The new arch was then completed and glazed before any work could commence on the kitchenette and toilets as they were adjoined the new partition wall. The height of the new partition was some 7.0metres.

There were repairs done to the ceiling, the main wall to the memorial was insulated with conservation grade insulation and then plastered. There were no repairs done to the area surrounding the memorial as the walls just needed redecoration.  The finished floor is pitch pine and is in keeping with other timbers used in the church. The only difference is that it is sanded and has a vanished finish. The project was completed on time and in budget and thanks go largely to a very diligent contractor and a small hard working subcommittee.

The rest of the church was painted as part of the contract but was separately priced because it could not be grant aided. This was essential as there was so much work undertaken in the north transept that the main church could not be neglected.