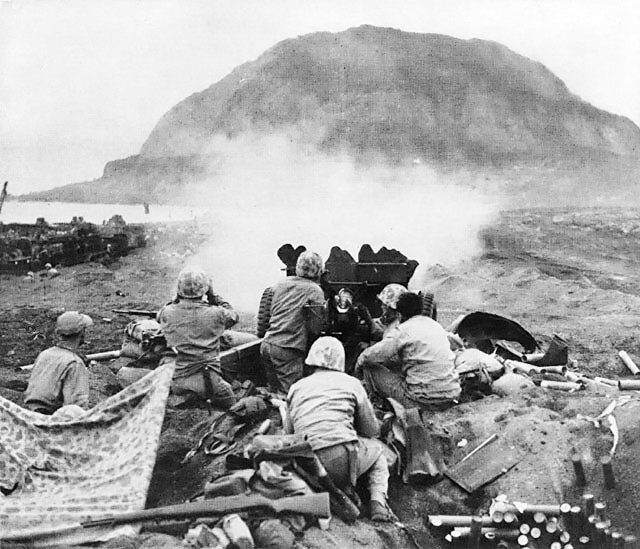 I was reading something a while back that talked of two films about the same event directed by Clint Eastwood.  I like my movies and I was a bit surprised that these films had passed me by unnoticed.  The two films were ‘Flags of our Fathers’ and ‘Letters from Iwo Jima’.

The films tell the story of the Second World War battle of Iwo Jima, a fairly none descript small volcanic island in the pacific.  The first of the films tells the story from the American side and most notably about the iconic photograph taken by Joe Rosenthal showing six US marines raising the American flag atop Mt Suribachi and its use in galvanising US citizens in supporting the war effort.  The other film, ‘Letters from Iwo Jima’ tells the other side of the story, in Japanese, of the defence of the island from the point of view of the general, an Olympic showjumper officer and a conscripted young man who is just a baker and writes letters home about his experience.

Neither film is a particularly easy watch but I guess that is the point.  The war was brutal, painful and in some ways futile with many dying for little reason.  However, both films do show the humanity of both sides but also the lack of it.  For me the portrayal of two sides of the same story highlighted two things.  Firstly, that opinions and beliefs will not always be shared.  Some may be right, others may be wrong, and other times both sides may be right.

And indeed, in the Christian life opinions often differ even in the same religion and we have been known to go to war about that as well but in Ephesians 4:1, we are urged to follow the right manner of living, not to have the right opinion.  In the kingdom of God, character and heart matter more than opinions.   That’s not to say that we abandon any search for truth, or that truth is relative. Many times truth is absolute, and we are called to search for it. But God desires that we pursue truth together with others who have varying perspectives, opinions and mind sets.

The other thing that struck me was the way in which the Japanese nation was transformed as a whole following the Second World War.  The nation of Japan was changed from an imperialistic culture where honour was paramount and serving the emperor even to the death was embedded in the mind set, which led to unbelievable brutality, to a generally peace loving and law abiding nation.

This is a reminder to us all that no one is beyond redemption.  Remember the murders, Moses and David and the thief crucified alongside Jesus.  All were admitted to heaven because despite their sins, they repented, sought forgiveness and were forgiven.  But many whose sins in worldly eyes were less serious didn’t make it to heaven because they forgot to repent and seek forgiveness.